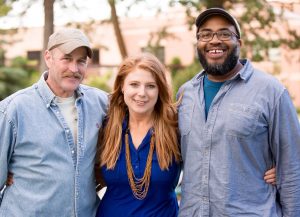 Sean Hill has worked with the conference since 2004. He’s the author of Dangerous Goods, (Milkweed Editions, 2014), winner of a Minnesota Book Award in poetry, and Blood Ties & Brown Liquor, (UGA Press, 2008), named one of the Ten Books All Georgians Should Read in 2015 by the Georgia Center for the Book. He’s received numerous awards including fellowships from the Cave Canem Foundation, the Region 2 Arts Council, the Bush Foundation, Minnesota State Arts Board, The Jerome Foundation, The MacDowell Colony, the University of Wisconsin, a Stegner Fellowship from Stanford University, and a Creative Writing Fellowship from the National Endowment for the Arts. Hill’s poems and essays have appeared or are forthcoming in Callaloo, Harvard Review, New England Review, Oxford American, Poetry, Terrain.org, Tin House, and numerous other journals, and in nearly two dozen anthologies including Black Nature and Villanelles. He was a professor in the Creative Writing Program at the University of Alaska – Fairbanks and in the Department of Writing & Linguistics at Georgia Southern University. Hill is a consulting editor at Broadsided Press, a monthly broadside publisher. He lives in Montana with his family and is an Assistant Professor of Creative Writing at the University of Montana.

Mathew Hawthorne has worked with the conference since 2008. He helps process participant applications, responds to questions, and works with the director to coordinate the conference – a glorious gathering of poets and writers that is the highlight of the year. In his youth, Mathew worked on sailboats, including as a charter skipper in the Caribbean and elsewhere. His poems and photography have appeared in Fire Ring Voices and Rivers Meeting and elsewhere. Mathew lives in the northwoods with his wife Debra and their grandson Quanah. Please email Mat at writersconference@bemidjistate.edu if you have any questions regarding the Northwoods Writers Conference.

Sara Dennison began working with the Minnesota Northwoods Writers Conference as an intern in 2013. In 2014, she was brought on as the Conference Administrator. Her role began with logistics where she set up sound systems, emceed participant readings, and assisted with staff, participant, auditor, and faculty needs. Over the years, this role has evolved into building and facilitating online architectures to support our virtual programming. It is her aim to ensure a happy and navigable conference for all. Sara spent her youth in the Colorado Rockies and Door County, Wisconsin. She departed Lake Michigan for Bemidji’s northwoods in 2005. There, she earned her BFA in Creative and Professional Writing and an MA in English from Bemidji State University. She instructed in the English and Honors programs at BSU before departing for the Pacific Northwest in the summer of 2015. Currently, she teaches writing at Chemeketa Community College nestled in the heart of the Willamette Valley in Salem, OR and is working on her MFA in Fiction with the University of Alaska Anchorage. Her work has appeared in Dust and Fire, Rivers Meeting, and A Teenager’s Guide to Feminism. If you have questions while at the conference, she’ll be glad to assist.