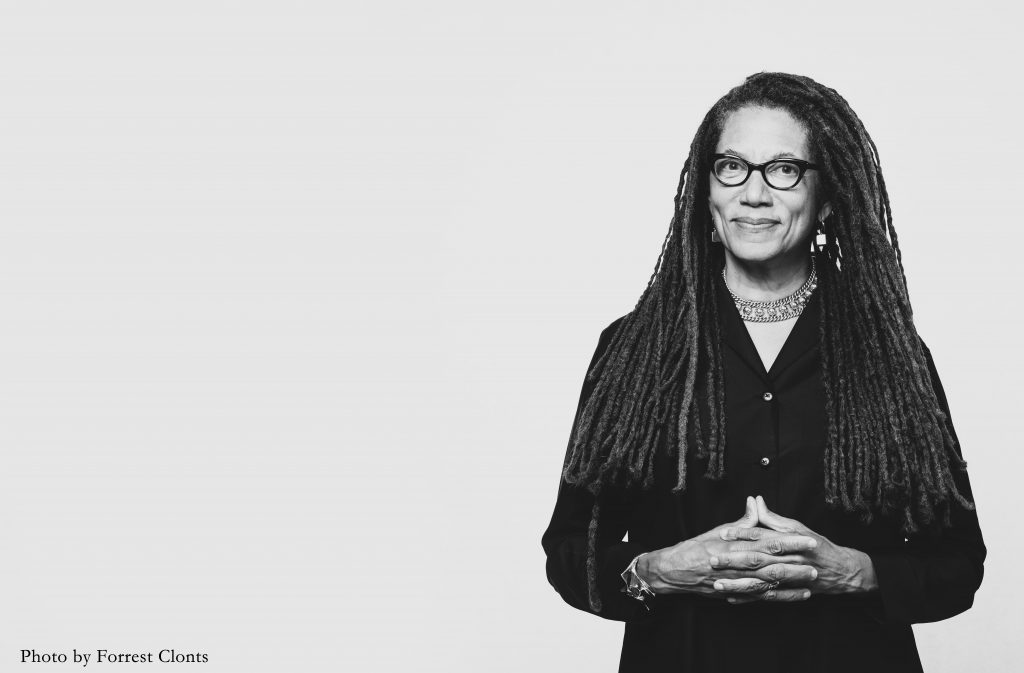 “So—you can write pretty,” Toni Cade Bambara tells the twenty-one-year-old Nikky Finney during a monthly writing circle that Bambara held in her Atlanta home during the 1980’s. “But what else can your words do besides adorn?” This flat-footed question, put to the young poet by the great short story writer, at the beginning of her career, sets her sailing toward a life of aiming her words to do more than pearl and decorate the page. She follows the path, beyond adornment, that Bambara lived and taught—a writing life rooted in empathetic engagement and human reciprocity. Nikky Finney has been a faculty member at Cave Canem summer workshop for African American poets; a founding member of the Affrilachian Poets, a particular place for poets of color in Appalachia; poet and professor for twenty-three years at the University of Kentucky; and visiting professor at Berea and Smith Colleges. She won the PEN American Open Book Award in 1996 and the Elizabeth O’Neill Verner Award for the Arts in South Carolina in 2016. She edited Black Poets Lean South, a Cave Canem anthology (2007) authored On Wings Made of Gauze (1985), Rice (1995), Heartwood (1997), The World Is Round (2003), and Head Off & Split, winner of the 2011 National Book Award for Poetry. Her acceptance speech has become a thing of legend, described by the 2011 NBA host, John Lithgow, as “the best acceptance speech ever–for anything.” In her home state of South Carolina, she involves herself in the day-to-day battles for truth and justice while also guiding both undergraduates and MFA students at the University of South Carolina where she is the John H. Bennett, Jr., Chair in Creative Writing and Southern Letters, with appointments in both the Department of English Language and Literature and the African American Studies Program, which she proudly notes is forty-six years strong. Nikky Finney’s work, in book form and video, including her now legendary acceptance speech, is on display in the inaugural exhibition of the African American Museum of History and Culture in Washington, D.C. You will find her in the poet’s corner, directly across from Chuck Berry’s 1973 candy apple red Cadillac Eldorado. Finney’s work includes the arenas of Black girl genius unrecognized, Black history misplaced and forgotten, and the stories of women who prefer to jump instead of ride the traditional tracks of polite and acceptable society. In her full body of poetry and storytelling, she explores the whispers and shouts of sexuality, the invisibility of poverty in a world continually smitten by the rich and the powerful, the graciousness of Black family perseverance, the truth of history, the grace and necessity of memory, as well as the titanic loss of habitat for all things precious and wild.

The new decade is here and so is Nikky’s new book. Love Child’s Hotbed of Occasional Poetry (pub date April 15, 2020) is her first poetry collection since winning the National Book Award in 2011. In addition to the poems, there are hotbeds, a horticulture term introducing her readers to her journals, the place where most of her poems have always found their calcium and strong knees. There are also artifacts, images and photographs, that assist the words in composing how the poet’s poet-life came to be. Over the last 30 years each and every Nikky Finney book has always been wonderfully different but this long awaited new minglement of word and image crafts a new kind of American poesy.